Take a deep dive into the fastest Gatsby, yet: Gatsby 5!

Support for the Gatsby Slice API was added in gatsby@5.0.0.

To further the improvements seen by Incremental Builds, Gatsby includes the Slice API that allows you to split pages into individual parts.

By using the <Slice> React component in combination with the createSlice API for common UI features, Gatsby will be able to build and deploy individual pieces of your site that had content changes, not just entire pages.

With the introduction of Incremental Builds, Gatsby Cloud has been able to reduce build times signficantly by only building the pages that changed. The Gatsby Slice API helps reduce those builds times further.

Common components that are shared across the majority of pages on your site might include a header, footer, or contact form. In today’s frameworks, when you re-order the header content, the entire site needs to be rebuilt. However, if the header was created as a Slice component, the new header content only need to be built once and all pages will pull the new header when it’s needed.

Using Slices in your site

For this example, let’s use the same scenario as described above - a large site that has a shared header. You’ll use this component as your Slice component.

When a Header change is issued, this what a build looks like:

Using the Slice component in gatsby-node

Now that you have a header Slice component created, let’s go use it!

After a successful gatsby build, you should see a list of Slices that were built for your site. We’ve created a Slice!

Now, when a Header change is issued, this what a build looks like:

Similar to the context that can be passed to pages in createPages, createSlice can also pass context to individual slice components.

The data passed to context here will be handed down to the Header Slice component with the key sliceContext.

Data can be queried the same way you can run queries within pages. These are called “slice queries” (as opposed to page queries).

In this example, let’s say you want to pull all header items from your CMS.

When Gatsby builds, this query will be ran and passed to Header within the data prop, just like page queries.

Slice queries can also accept parameters from the context passed to createSlice.

There will be times where a single Slice will either need to be handed different context or swapped entirely depending on which page it’s being rendered on.

An alias is not a 1-to-1 mapping of string-to-slice. When you create a page using createPages, you can pass a key-value map of alias-to-id to tell Gatsby which Slice component to use throughout the page.

One common use case for this is localization. It’s common to iterate over languages to create a page for each one. You can create a Slice for each language by passing context. The id that a Slice component is created with will be passed to createPage to tell each page which Slice component to use.

In this example, you create a Slice component of <Header> for each supported language. When you create each page, Gatsby will tell the page which header to use based on the language of the page Gatsby is creating.

To better visualize how aliases are working in this case, check out this diagram: 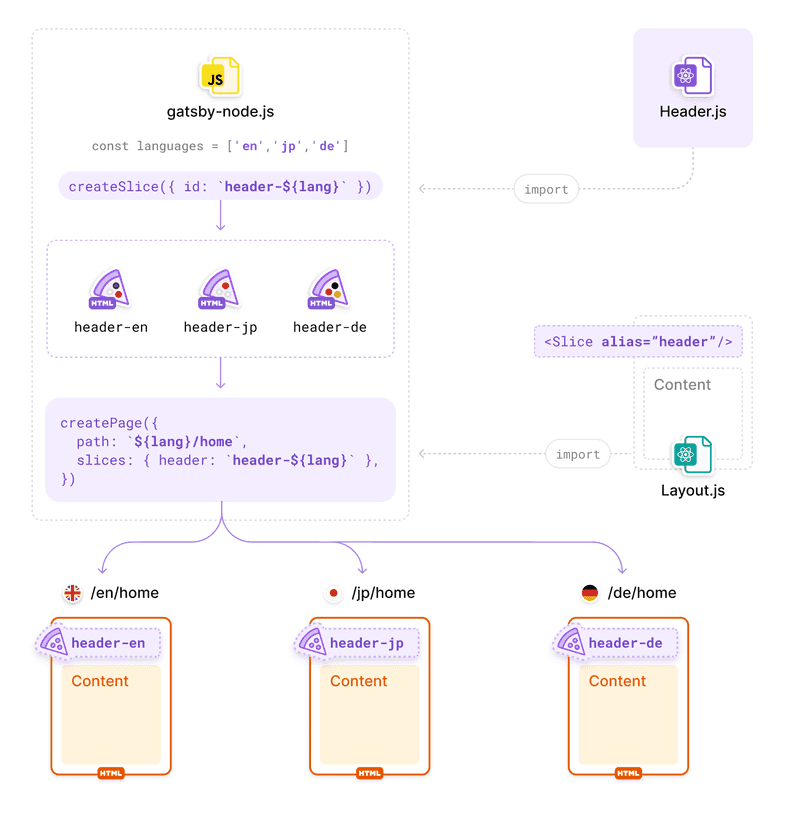 Edit this page on GitHub

Gatsby is powered by the amazing Gatsby
community and Gatsby, the company.